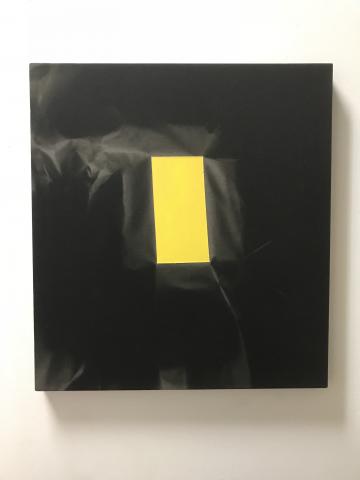 Store bought black fabric was wrapped around a brick and placed on a roof top in Oakland, California for 6 months. Upon harvest the fabric was washed, stretched and painted into in response to the composition created by the sun, wind and rain.

Chris Duncan is an Oakland-based artist who employs time,  repetition and accumulation as a basis for experiments in visual and sound based media. An overriding theme in current works is the use of natural forces, such as the sun, the moon and the ocean as conceptual and compositional prompts for both visual and sonic efforts. Duncan has exhibited nationally and internationally. He earned his BFA from CCAC and his MFA from Stanford University. Outside of his studio work, Chris runs LAND AND SEA, a project space and publishing imprint with his partner, Maria Otero.