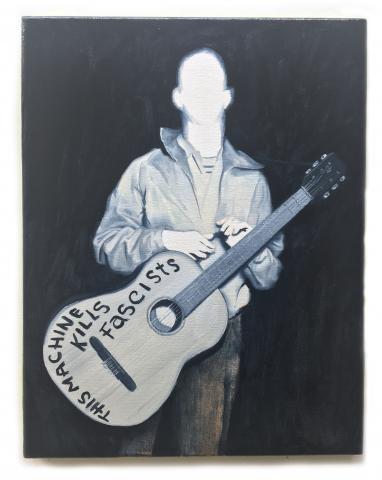 In 1941, in opposition to the rise of fascisim in Europe and the ground swell it was finding in America, Woody Guthurie composed some of the most lasting resistance and political songs in history. His iconic guitar scrawled with the slogan, "This Machine Kills Fascists" embodies his spirit of political awareness, vigilance and empowerment of the citizen. Who will answer the call today?

Michael Hall is an artist and educator whose work is concerned with finding empathy and complexity in situations that are often polarized and oversimplified. Hall is a recipient of both a Joan Mitchell Foundation Painters and Sculptors Grant and a MFA Fellowship at the Headlands Center for the Arts. He has been a resident at the Lucas Artist Residency Program in Saratoga and the Joan Mitchell Center in New Orleans. His recent Bay Area exhibitions include Catharine Clark Gallery, the Townsend Center at UC Berkeley, Southern Exposure, Root Division, and SF MOMA Artist Gallery. His work has been featured in group exhibitions nationally and throughout California, as well as numerous online and print publications, including New American Painting. Hall is an Assistant Professor at Cal State University, East Bay.