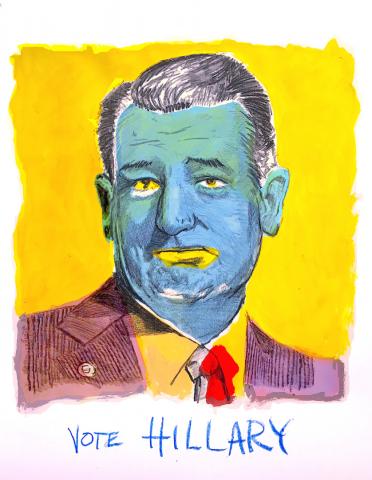 Inspired by Andy Warhol's iconic 1972 screenprint "Vote McGovern" (featuring Richard Nixon's visage), this work responds to a contemporary impetus towards progressive action through art practice – one that may seem futile, given the outcome of the 2016 presidential election, but which is nonetheless urgent and necessary.

Sandow Birk was born in Detroit, Michigan and raised on the beaches of Orange County, California. He is a graduate of the Otis Art Institute of Parsons School of Design, Los Angeles, and resides in Southern California. Subjects of his work include gang violence, graffiti culture, prisons, surfing, skateboarding, Dante’s Divine Comedy, the Iraq war, and the Qur’an. Birk creates monumental series developed over the course of many years, often working across media to support his ideas through a multi-disciplinary approach – painting, drawing, printmaking, writing, film, video, and sculpture.

Birk has exhibited in dozens of museum and galleries, and his work is in many public and museum collections including: SFMOMA and the Fine Art Museums of San Francisco; the Los Angeles County Museum of Art and The Getty Center in Los Angeles; the New York Historical Society and the Metropolitan Museum of Art in New York; Harvard University Art Museum in Cambridge, Massachusetts; Biblioteca Nazionale Centrale di Roma, Italy; and Stadtisches Kunstmuseum in Reutlingen, Germany. Birk has received an NEA grant, a Guggenheim Fellowship, a Fulbright Fellowship, a Getty Fellowship, and a City of Los Angeles Fellowship.