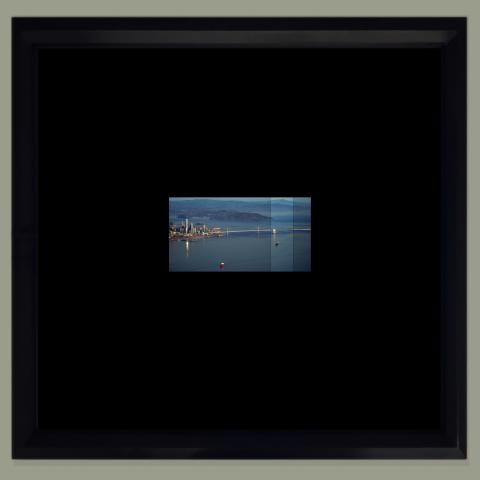 Untitled (bay + sun) is a painted and moving study of the San Francisco Bay and the city's skyline reflecting the morning sun, using footage shot by the artist during an airplane journey. The Material Language series is an innovative suite of works that examines the language and meaning of the material of painting, photography, film, and high-definition video in relationship to each other. Each work begins with a single image, then combines other mediums (such as an oil painting, photography, film, and high-definition video) to portray that single image in different media, but within one composition. The differing media are juxtaposed within the same, seamless composition to constitute one image.

Artist, filmmaker, and writer JD Beltran’s award-winning work has been screened and exhibited worldwide, and she is the President of the San Francisco Arts Commission, Director of the Center for Art & Public Life, and an Associate Professor at the California College of the Arts. Her work has been exhibited worldwide, including at the Walker Art Center, the San Francisco Museum of Modern Art, and the Getty Center.

Designer, engineer, artist, and mechatronics guru Scott Minneman invents, fabricates, and exhibits novel artworks and interactive projects, drawing upon architecture and engineering degrees from MIT and Stanford, his 15-year research stint at the think-tank Xerox PARC, and a futurist perspective developed while working at the Institute for the Future.