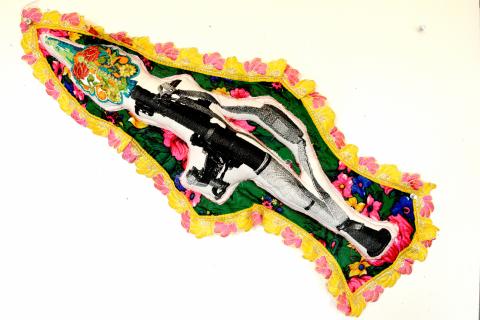 From the Series, Tomorrow We Inherit the Earth

"This multimedia series comprises of textile work, performance (The Alif Series) and video, attempts to use the feminine craft of fiber and textile-based art to create a landscape of a fictitious queer rebellion. Set in the future of an earth that may or may not belong to us, this revolution is seen through the eyes of a queer Muslim world intent on overthrowing the shackles of Western Imperialism. The aspiration behind this series is to subvert the Western gaze of the Muslim and by extension brown and black body by creating glamorous and high femme queered future guerrilla fighters who do not fit neatly into categories of gender, race, faith, threat or desirable subject. It seeks to challenge the shifting borders between terrorist and freedom fighter as seen and named by the Anglo-Saxon world.

The series takes from multiple archives including – but not limited to – photos I took of wrestling cultures in my home, Pakistan and writing sourced from an Urdu children’s book, Stories of Rambo, an account of Hollywood hero Rambo and his brave fight against the Soviet Union alongside the Mujahideen. Through writing and image, a narrative is literally written and illustrated over a prolonged period of time."

Zulfikar Ali Bhutto is a visual and performance artist, zombie drag queen – who goes by the Alias Faluda Islam – as well as curator of mixed Pakistani, Lebanese and Iranian descent. He is based in San Francisco, California where he received an MFA in Studio Art at the San Francisco Art Institute in 2016.

Bhutto’s work delves deep into a futurist imagining of South Asia, the Middle East and the larger Muslim world, through a research based process excavating archives from disparate sources. He takes on histories of revolution, resistance and resilience and queers them using his body as a filter through a multi-media practice based primarily in the realm of future story telling.